Red and processed meat, it’s widely believed that consuming too much of it is bad for our health, increasing our risk of cancer, heart disease, diabetes and our overall chances of death. However, what if eating moderate amounts of red or processed meat did not harm your health

NutriRECS, an independent group with extensive expertise in guideline production methodology, published a 2019 guideline on the topic, focusing solely on the health outcomes. The investigators did not address animal welfare or environmental issues related to meat.

The investigators found that among 12 randomized controlled trials enrolling 54,000 individuals, there was no credible evidence that consuming less red and processed meat reduced the risk of cancer, heart disease, or diabetes risk. By contrast, they did find, based on observational studies, reduced risks of some cancers, heart disease, and diabetes, although the evidence was of low and very low certainty. So what’s going on here?

In research, biases can arise in various ways, including the selection of study participants and the methods chosen for collecting data and study execution. This was particularly the case with observational studies devoid of randomization, where free-living participants are followed over a long period of time for a multitude of risk factors and health outcomes without a specific intervention or control group. Often biases are unintentional. However, within nutrition research, we often see observational data used to make dietary recommendations or policy, which is limited by confounding factors.

For instance, poor lifestyle choices such as smoking, poor dietary choices and limited exercise usually track together with high meat consumption. Further, self-reported dietary intake is often at risk of bias. Bias related to poor dietary recall. Many observational studies only collect dietary intake at baseline or in some every four to six years, but then use their data to predict health outcomes 10, 15 and sometimes 20 plus years later. These biases can lead to inaccurate estimates of risk. Thus, we are less confident in the results and we call it low certainty evidence.

Good dietary guidelines are based on eight standards set by the Institute of Medicine, including the need for systematic reviews and meta analysis, assessment of evidence, certainty, management of conflicts of interest, and a priori detailed study protocols that are publicly available for download, which allow scientists to plan the study methods and statistical analysis in advance, avoiding the temptation to focus on compelling findings or neglecting findings that differ from the status quo.

When it comes to creating nutritional guidelines from the data, ideally, based on protocol driven systematic reviews and meta analysis of the totality of evidence, a panel of experts are brought together to assess the balance of outcomes on the benefits and harms for dietary interventions. This assessment should be based on the certainty of evidence for each outcome. In 2019, NutriRECS produced what has been referred to as the highest quality guidelines on red and processed meat specific to health outcomes, minimizing the potential for bias by following Institute of Medicine standards, including the conduct of four systematic reviews and meta analysis.

The investigators also did a systematic review of the public’s values and preferences around meat and health outcomes. Why? Well, when making recommendations for those who will actually use the recommendations, that is patients and members of the public, in addition to considering the benefits and harms, values and preferences are needed in order to consider the balance of benefits and harms from the perspective of the target population. Furthermore, given that a 2018 review of the evidence showed that less than 15 percent of dietary guidelines disclose conflicts of interest and less than 10 percent have a policy for managing conflicts, NutriRECS also took important steps to minimize potential conflicts of interest by screening and reporting on panel members, previous intellectual public positions, eating habits of panel members, a first in the field, and funding over the previous three years.

This strict assessment of panel members was, to date, the most comprehensive attempt by any dietary guideline group to manage potential conflicts and biases. More importantly, NutriRECS are the first to present dietary guidelines using dose response data, absolute estimates of effect for each health outcome, the certainty of evidence for each health outcome, and together with systematic reviews of the harms and benefits, the first to explicitly consider the public’s values and preferences. To assess certainty NutriRECS used the GRADE approach, adopted by over 120 health organizations worldwide, including the World Health Organization, Centers for Disease Control, and the Cochrane Nutrition Field

The GRADE approach is based on over 30 peer-reviewed papers. Using GRADE higher certainty evidence is generally needed to support causal relationships, while lower certainty indicates that the evidence supporting a causal relationship is uncertain or very unlikely. Although critics have decried the use of GRADE nutrition given that GRADE has been adopted worldwide, the NutriRECS team emphasized the need for a common standard, so that one can fairly compare the certainty of evidence across health care interventions, including drugs, surgery, acupuncture, dietary interventions or lifestyle factors such as exercise.

Based on observational studies, the investigators demonstrated that the absolute risk of reductions of meat consumption related to health problems are typically very small, less than one percent based on low certainty evidence, with previous guidelines being heavily biased by exclusive reporting of relative risk reductions suggesting large relative risk reductions and either neglecting to or not assessing and reporting robust assessment of the certainty of evidence for each outcome

For instance, regarding an absolute versus a relative risk reduction based on low certainty evidence, the data show an absolute risk of 105 per 1,000 people followed from naught to 75 years of age will die from cancer in the average population and 98 per 1,000 will die for those that eat three fewer servings of red meat per week.

The investigators concluded that individuals should be fully informed of the low certainty of evidence and the very small risk reductions, if at all. Decisions regarding a reduction in red or processed meat consumption is value and preference-sensitive. That is some will choose to reduce, while some will not. 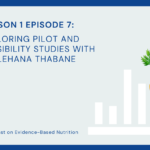 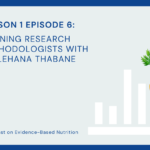 Season 1 Episode 5: The Principles of Proof with Dr. Dennis Bier